The iconic feminist, the writer, the political activist and the author of her later biography, ‘My Life on the Road’.

As a girl, she traveled across the US between Ohio and Florida for most of her informative years. The trailor upbringing came to an end when her parents divorced, she went to live and care for her depression troubled mother, now attending school regularly from
the first time at the age of eleven.

After college she was awarded a fellowship and spent two years in India. During her travels she opted for a termination of pregnancy in London ten years before they were legal.

From this she became a journalism, a groundbreaking article being ‘A Bunny’s Tale’, where she went undercover as a playboy bunny to get the dirt on Hugh Hefner and the Playboy empire. Co-founding New York Magazine and Ms Magazine, which she later became an editor for several decades later. From the late sixties she rubbed shoulders with greats like Betty Friedan as they marched for the liberation of women.

Now, at the age of eighty-five, she is technically in retirement. However, social activism work is not something you retire from, she is still penning the writings which inspire women Globally.

Her latest biography, ‘My Life on the Road’ contains so many awe-inspiring quotes, we give only a few to lay a foundation for Steinemism and the future:

‘Dick and Jane limitations that school put on girls.’

From her travels in India:

‘Most of us, I love graduations. They are individual and communal, an end and a beginning, more permanent than weddings, more inclusive than religions, and possibly the most moving ceremonies on earth.’

‘Needing approval is a female cultural disease, and often a sign of doing the wrong thing.’

‘A journey -whether it’s to the corner grocery or through life-is supposed to have a beginning, middle and end, right? Well the road is not like that at all. It’s the very illogical and the juxtaposed differences of the road-combined with our search for meaning-that make travel so addictive.

‘My Life on the Road’ is available from Amazon 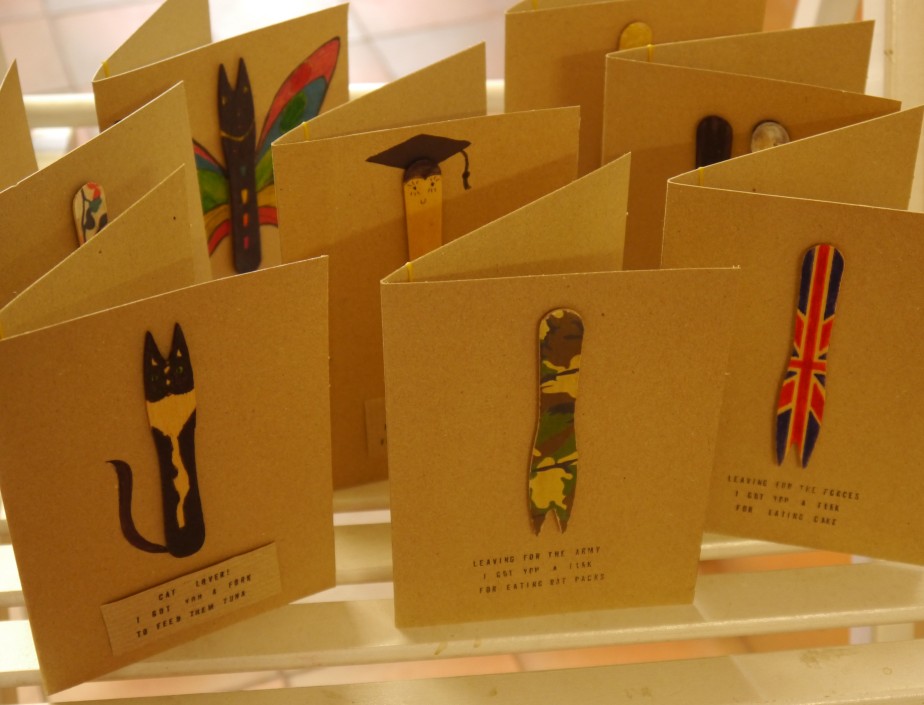 Rubbish Cards are the latest greeting card range from Alison Little. The card range literally utilises ‘Rubbish’ for the purposes of celebration. Throw away wooden forks are used in full splendour for the collection. Birthdays are marked using butterfly’s, flowers and flags, the message of eating cake added. A traditional Graduation gown marks leaving home for Uni, the fork for eating pot noodle. It’s counterpart, graduation features a gold leaf variety for use when eating caviar. Rat packs are the suggested food choice for the camouflage leaving for the Army option. The delightfully painted Cat Fork is suggested for feeding the feline traditional tuna. Finishing off with a double fork card marking an engagement.

A delight and a pleasure.

£2.50 each, available from Arts Hub from early April.