I May Destroy You

A staggering 6 weeks ago, when lock down restrictions were beginning to ease, our TV screens and minds were illuminated by: ‘I May Destroy you’. I, myself, who fared badly from the pandemic, was starting to recover from a long tail case of Covid-19. This drama series was the primary broadcast I was desperate to watch. Its impact is set to last far beyond the 6 hours of air time which the BBC allotted.

The main narrative centres around the rape of the Arabella; the feisty, strong-willed, leading lady. Michaela Coel who wrote starred and co-produced the series plays Arabella. The realistic screenplay leads us through flashbacks of her being raped. In reporting the matter to the Police they were able to establish that she had been subject to date-rape drugging. Perhaps not so realistic: the Police are shown to be professional, compassionate and supportive. Inevitably the case had to be shelved until a DNA match presents itself to the investigation. However, what is ground-breaking is we see Arabella: a hard-partying recreational drug user, convincingly being able to differentiate clearly between being secretly drugged, then subject to intercourse and simply, narcotic indulgence followed by consensual sex. At no point is the viewer directed to blame Arabella due to volatile lifestyle choices or to consider her to be unreliable as a consequence.

Arabella’ response to the violation could be considered from varied viewpoints. Promiscuity as a result of a sex attack liberated sex-positive behaviour or further examples of not fully consensual sex as a result of drug and alcohol usage. This leaves her vulnerable to a further sexual assault, interestingly in the form of stealthing: removal of a condom without the consent of the sexual partner. I and many viewers, male and female, were unaware that this was a criminal matter, the show was surprisingly informative.

We are offered some reasoning as to why Arabella’ sexual conduct presents us with a large variety of partners, many of whom are little more than acquaintances. The series takes us back to her infancy, parents who reside separately, but are still in a relationship. A father who indulges in a ‘Fancy Woman’ and to a degree, neglects his parental duties.

Breathtaking to see greater diversity on our screens, the main characters all being from ethnic minorities (Within the UK, not Globally). I found Arabella immediately appealing, the funky jacket and the wilds of pink hair. Terry, the loyal friend that every girl need to have, both are: fun, alluring, party goers. In opposition to this, the only more than minor white female: Theo, is overweight, unattractive and morally warped. A wondrous mid-series episode takes us back to secondary school, only done successfully in Romy and Michele’s High School Union during the late nineties. The retro-fun element of camera phones being new, hilarious in comparison to the multi-faceted smartphones of today. We see the only significant white, female character, falsely accuse a black man of rape. Equally to this, it becomes clear that Arabella’ rapist was white, herself being of colour. Is this a lesson for white supremacy, are matters being transformed in terms of traditional villain, victim roles in terms of race?

As a white female, I found some of the script a little isolating, the dialogue of:

stated by Terry. The scene in which Arabella takes extreme offence from being referred to as being from an ‘Afro-Caribbean background’ as opposed to simply of ‘African background’. This combined with making the medical professional linger while they shoot a podcast. This did not appear to be an act of standing up to racism, more the conduct of adolescents that belonged in a classroom seated next to Catherine Tate’s Vicky Pollard.

The range of taboo subjects brought to the drama was radical, in the extreme. The casual use of sanitary towels, menstruation no longer to be hidden and ignored. However, I found the scene in which she brings home a Man which she has just met in a night club off-putting. They endeavour to have intercourse while she is on her period. This combined with them both playing with her heavy, ‘Squishy’ discharge bordering on vulgar.

We are introduced to group sex on several occasions and internet dating, which pre-Millennial’s didn’t indulge. Significantly, the concept of social media addiction is raised, something we are all beginning to ponder over as a result of lock down and periods of isolation. Primarily, we are embraced by the subject of male rape, a major taboo, the public only being widely aware that this happened since the turn of the Millennium. Although the male rape scene was convincing, I was deterred by the response of the character. Devastation, regret and self-blame were not conveyed convincingly.

Although there were some downsides, this is a monumental step forward in challenging the many failings within our society; primarily rape culture. The ambiguity of the concluding episode adds to the mental turmoil over violation and redemption. The series instigated discussions and debate, a drama which will get us talking about rape.

Set to take the short trip over the pond, let’s hope Arabella & Co, can do the same for the Americans! 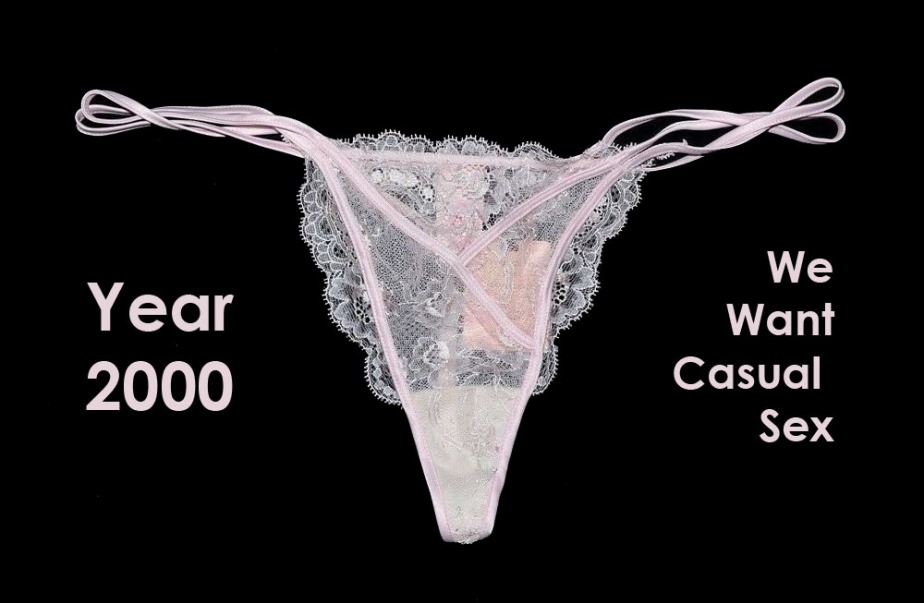 Who was in their late teens, earlier twenties at the turn of the Millennium?

The first wave of feminism lead by Emmeline Pankhurst got us the vote, The sixties offered us effective contraception through the much love ‘Pill’. Abortion rights were introduced and free love became the spirit of the decade.

The seventies were characterised by second-wave feminism, with this came divorce and couples which no longer wanted to be together separated. Women were now able to gain their freedom back from unhappy marriages and able to move on and find new partners.

HIV and Aids topped the headlines throughout the eighties, we became more aware and safe sex was the name of the game.

What came next: the nighties and the turn of the Millennium which brought in third wave feminism and the rise of raunch culture. We were the ladettes, the females which knew how to make decisions about what they wanted. We didn’t want marriage, we didn’t want engagement, we didn’t want serious relationships. We were the generation of young women who turned around and said:

We were the girls how wanted to go on top in the bedroom and we lead with our thongs.

It was a consumer trend gone mad. They were all that were on sale in the younger fashion shops: Top shop, Miss Selfridge and River Island. The supermarkets got in on the act and George at Asda were doing 3 for a £5. Even the Great traditional British institution: Marks and Spenser had them on sale. Share houses, rented flats and clothes dryers across the country paraded collections of triangular, string combination thongs.

But do you remember how uncomfortable they were?

When they used to rise up and function like a cheese wire trying to cut through the central valley or your bottom. Rising up higher than the waistband of your low slung jeans and make an appearance to those all around you. The tin string marks you used to get from the lack of support offered by the flimsy creations.

So we lead with our bum checks on display, but now we’ve all settled down we get to wear much more comfortable underwear, briefs and little shorts now adorning our lower regions.

Park Benched is a fictional works by Alison Little.

I stand solid and well positioned overlooking the lake in Stanley Park. A traditional park bench is my primary role. High-quality seating provision for the park dwellers of the North Liverpool district of the famed Anfield. To my front, I have the Kop and the Liverpool Football Club stadium, to my rear I have the home of Everton Football Club: Goodison Park. I am the great divider, a barrier and a leading resting point solution and clearly not a rotting park bench in need of a lick of paint.

Approached by a young man, he sits down looking a little too eager. He has been here several times over the summer months. Not from Liverpool, he wears baggy jeans combined with a smarter cotton shirt, his neck is engulfed by a mass of multicolour plastic jewellery. Hair dyed a bright range of colours from pink to blue, and a hoody is tied around his waist. His look is finished off by a token tribute to his sexuality, a rainbow lapel badge pinned to the pocket of his shirt.

He must be a student off Uni for the summer months I think to myself. Viewing the soft features of his cheekbones I ponder over the look of anticipation on his face. Here come another man, much older, he has been visiting my bench for countless years, a regular of many moons. Dressed in a variety of faded shades of black he brandishes a wiry greying beard, although summer he wears a dark jacket, dusty and unkempt in appearance. His eye twitches as it always does from under the well-worn wool hat which tops of his thinning figure.

They begin to talk quietly to one another, after around five minutes they leave my seating solution and skulk off towards the bushes towards the left-hand gate, a quieter space within the park.

After around a quarter of an hour, they return and take a seat together. As of earlier, they talk quietly for a while. I look at the student, the innocence and naivety glowing from his flushed face. Here it comes, I’ve seen this many times before, the finishing gesture. The older man squeezes his knee, clenching his hands gently a few times, then subtly he slots a rolled ten-pound note into the shirt pocket beside the rainbow lapel badge. Rubbing his shoulder goodbye he makes his way off, his dark trousers trailing the ground slightly as he sludges away.

The vulnerability of the student, the lack of understanding apparent on his face. Not fully comprehending what had just happened, unsure of why he had been given money. As he decides to leave I hope never to see him again, taking a seat, recognising there are better ways of living.

A Letter to Fat Fiasol’ Mother is a flash fiction piece from Alison Little. She created the prose as an exercise while writing her novel, Casual Nexus. The piece adopts the point of view of the main character of the narrative: Sal and is directed towards the Mother of an undercover Police Officer who failed her through his role as a detective. The Mother is shown to be deluded in regards to the warped characteristics of her only son and unashamed of his conduct. All characters and events are fictional and not based on actual occurrences.

A Letter to his Mother

Why your Son was not good enough for me!

So, back to Fat Fiasol’ Mother

Reasons why he was not good enough for me!

So Fat Fiasol’ Mother, the reasons why your son was not good enough for me! He talks too much and he won’t listen to any of the girls. He seeks to manipulate, he works to warped agenda’s, he loses sight of right and wrong. He his sick fetish tastes in porn, bazaar sexual desires, he is sexually inadequate, he is unable to get a proper erection. He was incompetent as a Police Officer in every way and most of all he was more interested in the sound of his own voice and getting his little end away than he was in doing anything about a Rapist. So Fat Fiasol’ Mother those are the reasons why your son was not good enough for me, his next girlfriend or any any other women. So instead of sitting there in defence of your offspring, I suggest you hang your head in shame.