The Female suspension is an installation which addresses a world of sexual violence. The lower bodies and limbs of numerous women who have been raped are suspended by chained, hooks penetrating their groins. Meat like, a waste product, violated then disposed of like an animal carcass meat still to be stripped from the bones.

This will be the fourth installation to take over at 5 Bold Place as part of the art in windows project. Art in Windows is a small organisation that works with landlords and artists to commission and curate temporary and permanent artworks for display in empty windows in and around Liverpool. Windows have varied from those in empty shops in the city centre and on local high streets, to empty units in shopping centres and even in houses on residential streets. Art in Windows’ displays range from a single installation for two weeks, to a series of different installations across many months.

The form is a female abdomen and legs extending down to the feet. Each represents a rape victim, The World Health Organization (WHO) estimate:

Global estimates published by WHO indicate that about 1 in 3 (35%) women worldwide have experienced either physical and/or sexual intimate partner violence or non-partner sexual violence in their lifetime.

The charity Rape Crisis England and Wales respond to an average of 3,000 calls per month from women who have been raped. In April 2017 there were 422 recorded violent and sex offences recorded in Liverpool alone. It is estimated that only one in every ten incidents of rape are reported to the Police: the actual figure is projected to be much higher.

Polythene and shredded paper are used to create each of the sculptural works, red toned papers are used around the groin area to reflect the pain suffered from the attack. Wire wool is used to represent the pubic hair, this demonstrates resistance from the violation. The lack of upper body and stones in the feet show a woman who was unable to oppose the onslaught. The hook is driven through the groin area, this enables us to reflect upon the extreme violence used in sex attacks. We view to forms suspended in a warehouse environment, infinite in number and we are given the impression that more will simply be added to the collection.

Alison Little, the artist behind the Female Suspension, she has been North -West based for the last decade and worked on commissions from the Superlambanana trail to the Penguins. Her most recent conceptual works are SV: Sex by Violence, a series of four animated sculptures which show the different stages of a sex attack. They were exhibited in a solo show at zauhause gallery, Gostins Hanover Street (Liverpool City Centre) in July of 2017. In the months prior to this, she curated a group show ‘Shatter the Silence, Violence against women’ held at the Quaker Meeting House, School Lane (Liverpool City Centre). ‘Life from the Waist Down’ is the fourth of the series, representing the recovery process it was exhibited at Unit 51, Baltic Triangle (Liverpool) for 2016 Mental Health week. On the previous year she showed Brainscape as similar human head form and in 2014 Bipolar B was created for the celebrations at the Williamson Gallery in Birkenhead. In 2016 she worked on a commission for the race equality centre in Derby where a polyethene figure and a broken wheelchair were created to draw attention to race hate crime. Her first work relating the sexual violence was in 2014 for the Speaking Out exhibition at Embrace Arts, University of Leicester. The work was exhibited and Alison attended the Speaking Out conference where she addressed the delegates on the thought processes behind her work. Prior to that, she ran a successful funding bid and project managed the prospering ‘Rags Boutique’ as part of the ‘Shops up Front’ scheme from Liverpool City Council. This was an exhibition space and workshop venue was the use of found object was utilised to maximum effect. Alison helps Organise the Reclaim the Night March held in spring in Liverpool annually. The intentions behind the exhibition as a means of activism against sexual violence and to play its role in her campaign work.

The Female Suspension which will shock, inform, evoke debate and lead to social reform in direct regards to Rape crime.

Artist Talk to be held on International Women’s Day, Thursday the 8th of March from 6.30-7pm. Talk starting at Bold Place then either being held inside or to be moved to another location possible to be provided by John Moores Uni. Details to be confirmed, to book: 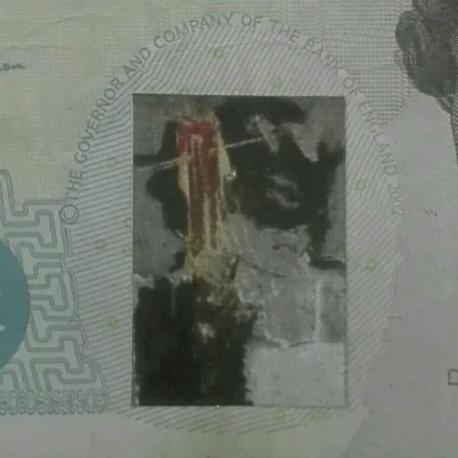 Last week, Liverpool based artist Nigel Leslie talked us through how he had been selected as 1 of 100 important artists to decorate an old £5 note for a charity auction. Names already signed up include the Chapman Brothers, Gilbert and George, Gavin Turk, Liverpool’s iconic Peter Blake in addition to Cyrano Denn aka Danny Crone also based in the region. ‘Fivers for Artistic’ is a bright new charity set up to help mentor new young artists to overcome barriers and become self-sustaining within the art world.

Finally, we get to see the original creation: The artwork by me is called ‘Feline – Male’ (2016). Mixed media. The original painting was reduced from a photograph and transferred onto the old £5 note.

All that’s left to do is sign the new creation and wait and see how much it raises at Auction. 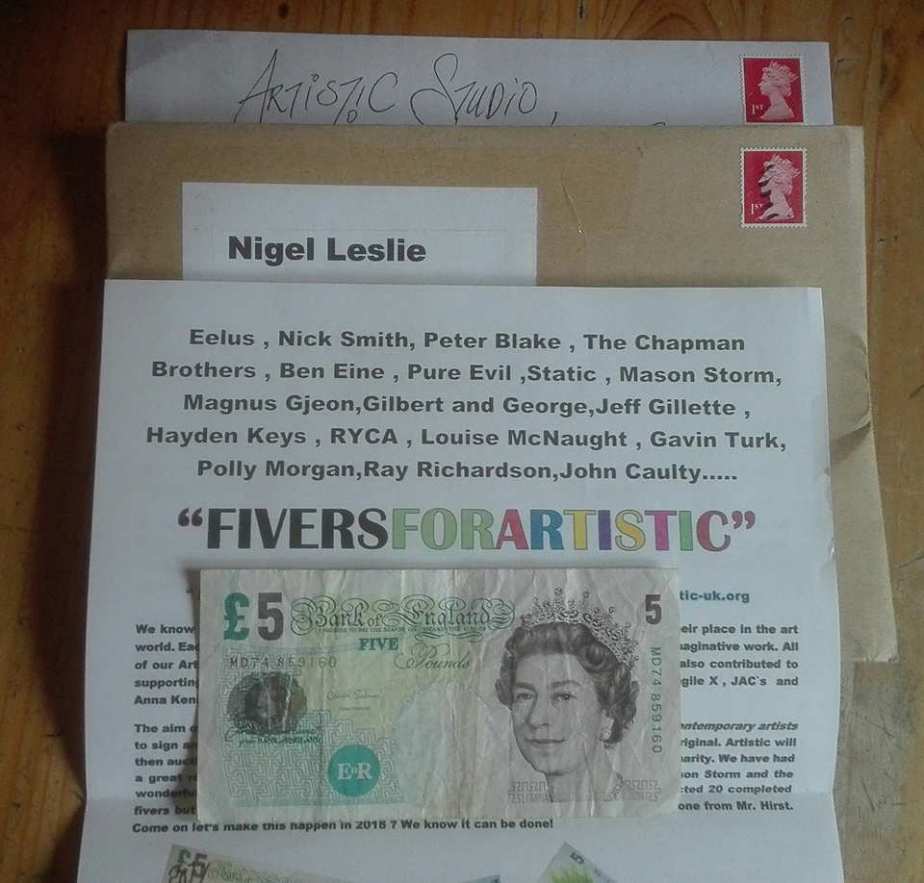 Birkenhead based artist Nigel Leslie has been selected as 1 of 100 important artists to decorate an old £5 note for a charity auction. Names already signed up include the Chapman Brothers, Gilbert and George, Gavin Turk, Liverpool’s iconic Peter Blake in addition to Cyrano Denn aka Danny Crone.

‘The aim of “FIVERSFORARTISTIC” is to collect 100 old fivers and convince important contemporary artists to sign and then decorate the fiver in any way they wish making the note completely original. Artistic will then auction the collection of fivers to raise enough money to launch Artistic as a CIO charity.’

‘Artistic’ the charity behind ‘Fivers for Artistic’ is a wonderful charity ran by volunteers to build creative communities and support artist’s, many of the participants are autistic.

Leslie spent the mid-nineties studying in the Capital, falling in with the Jarvis Cocker, Damon Albarn and Damien Hirst crowd that centred around St Martins. After a decade of hard parties, sofa loafing and at times making some Art. He returned to Liverpool in 1999. Through his abstracts, he combines figurative forms which play strong relation to the environment in which they are placed. Indications of human forms appear to effortlessly wiped onto the canvases. Some imply elements of bone structure and skull forms, weapon like straight edged are often added. The simplicity of the often brightly coloured environments which the figures have been placed often suggest disturbance. ‘Wrecked’, one of Leslie’s latest works was created last year and reflective of the emotive relationship which is played out within the Metropolis, directing us towards feelings of turmoil. We get the impression of a ship like for from the base, an indication of an old-fashioned wind powered, sailing vessel. Central to the ship there is an indication of a central figure, possible a human form of even a feline based creature. The pink tones of the water suggest a blood, combined with a simple line of the horizon they are not intrusive in regards to the central focus. The title ‘Wrecked’ looks at the idea of awakening from a night of drinking and general misadventure suffering the consequences and deciphering what had happened the evening previous evening.

On Thursday morning the postman posted a prominent package for Leslie: the old fiver had finally been delivered. So in fitting with Leslie’s creative practice when asked how he was intending to decorate the well-worn note:

was an appropriate response. Like his studio application techniques where he cements on layers of paints then scrapes them off to imply rather than dictate a clear vision we will have to wait and see what emerges on the paper money base.

Nigel Leslie a true Liverpool talent and an old £5 note which will be immortalised for future generations when currency only exists in the electronic format. 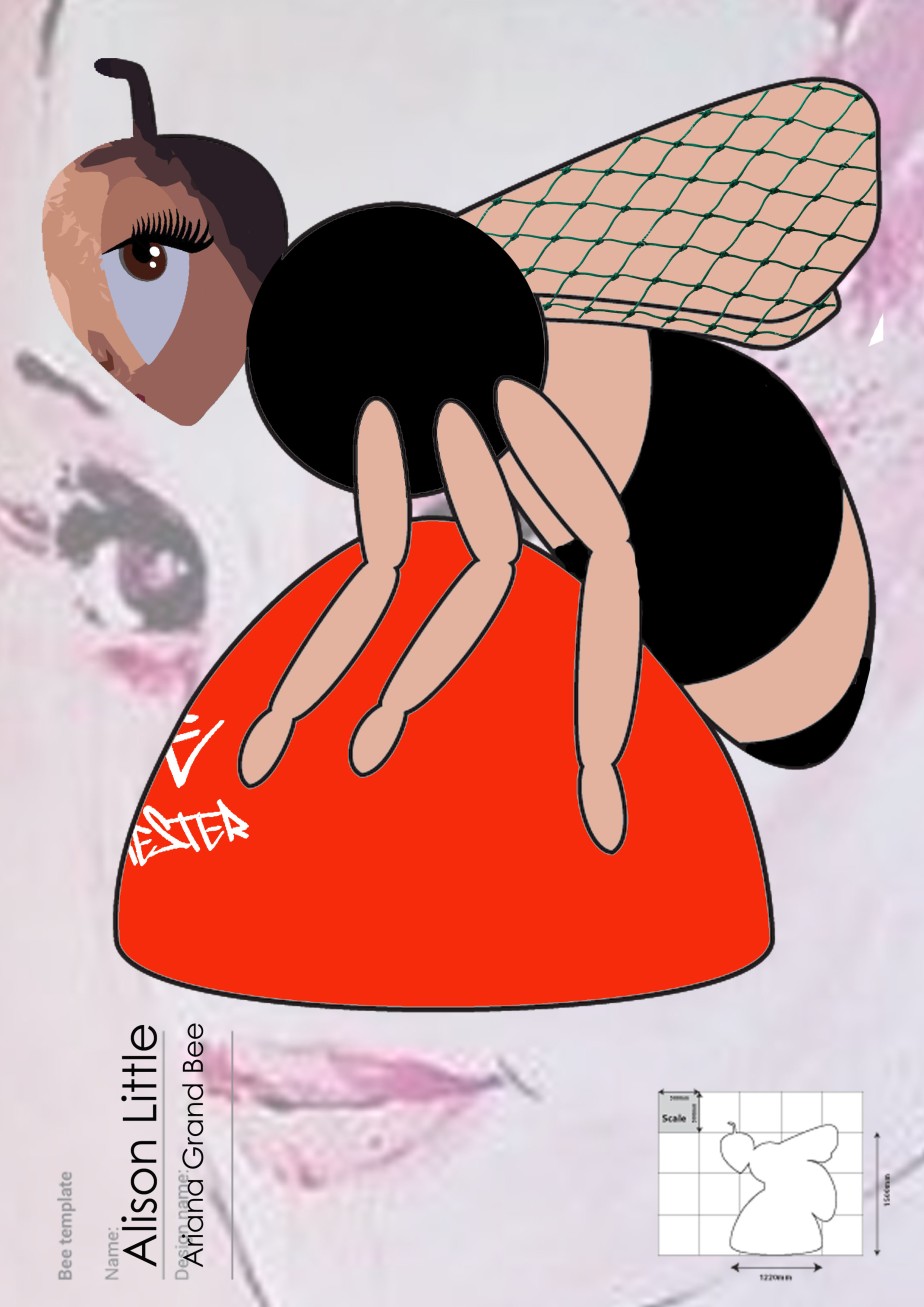 Ariana Grande Bee is the design submitted for Bee in the city, the mass public art trail to take place in the summer of 2018 in Manchester. This design is one of two submitted by Artist Alison Little.

Ariana Grande Bea is a tribute to the star Ariana Grande who took to the people Manchester and the nations hearts after the devastating terror attack in May of last year. The representation plays tribute to the costumes she wears to performs many of her gigs, with the full swag of a singing and dancing sensation. In the base of the form, we make reference to ‘One Love Manchester’ the slogan presented on the famous white hoodie she wore for the charity concert held only two weeks after the carnage of the explosion. 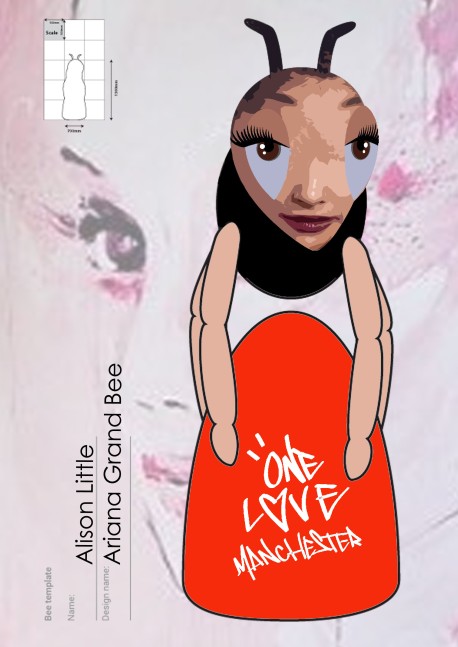 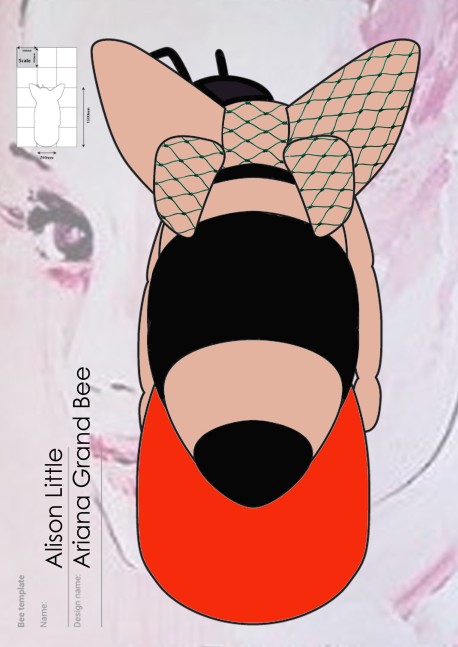