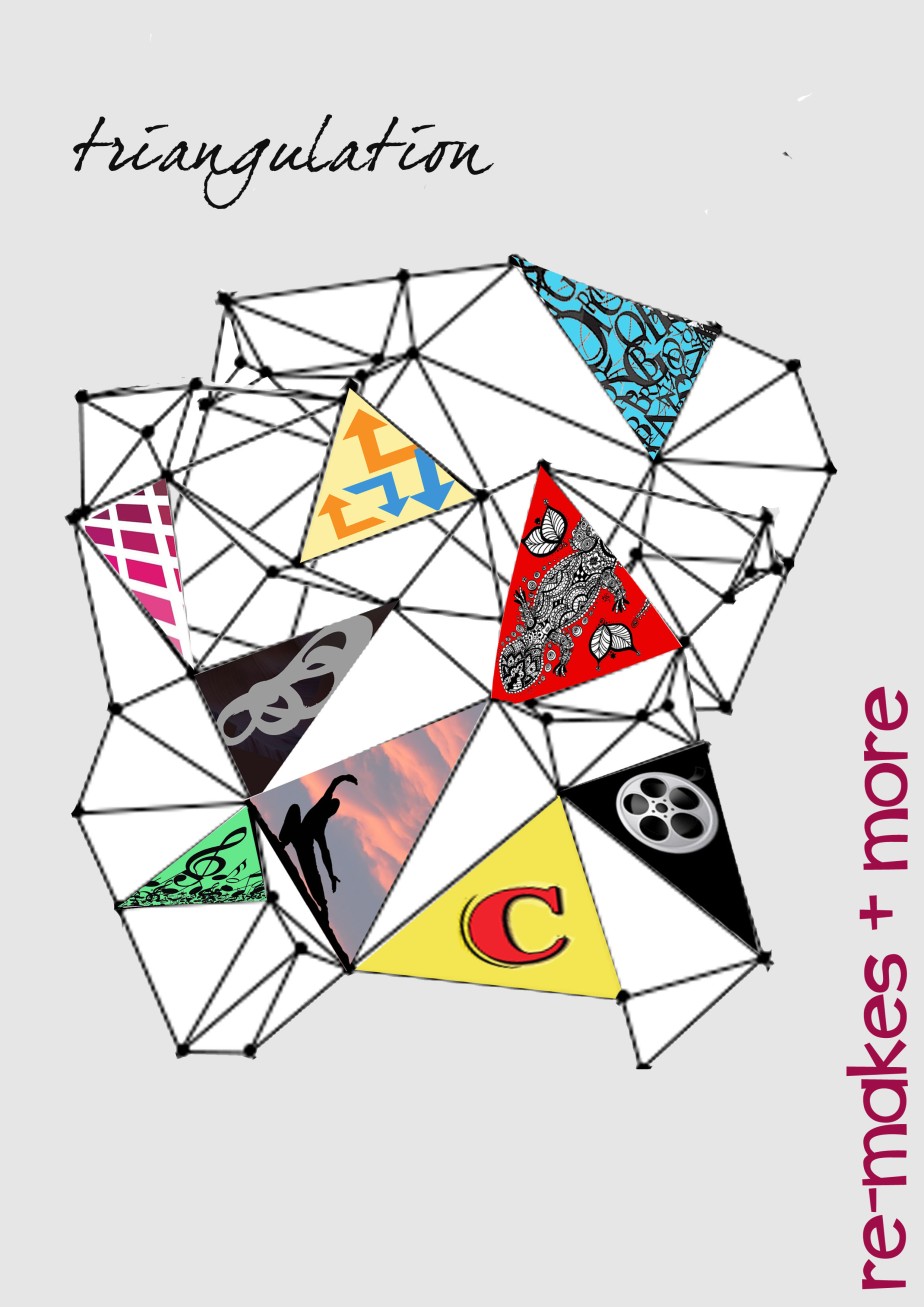 Triangulation was a mural concept put forward to Cains Brewery Development in Liverpool:

Alison Little is a visual artist and writer based in Liverpool, she looks to combine her visual arts and creative writing practice. As an artist, she has worked on numerous commissions from Go Superlambanana’s to Kirby Town Centre Renewal. Her creative endeavours are to include the project management of Rags Boutique: a project to open a disused retail unit as an exhibition space and workshop venue. Working on numerous public art commissions in the North West, the UK and Western Europe. For the Capital of Culture celebrations in Liverpool, she gained two commissions for Super Lambanana to be sited in the colossal Public Arts Trail which was to overtake Liverpool for the celebrations. Her more recent public art commissions are to include work for Kirby Town centre regeneration where she brought the Vikings back to the North West, strong graphical techniques were used for her most recent mural for East Street Arts new location in Garston. In spring of this year, she completed her 6th Super Lambanana commission for the Lip Doctors in Maghull in which she adorned the creature in an array of lips to create: Super Lambanana Lips, her finest to date. In addition to her arts practice, she writes about the Liverpool creative scene, published in Hidden Gems, Art in Liverpool website and her well-read blog. 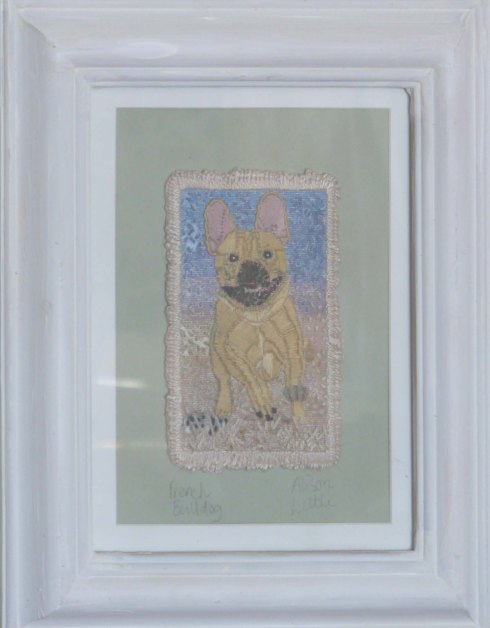 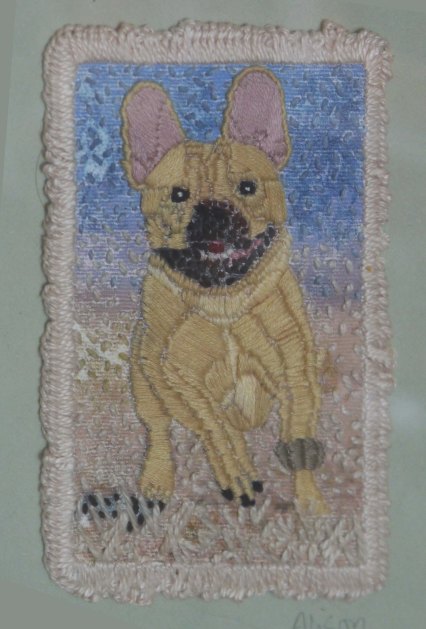 Canines, felines, of the feathered and scaled varieties and equestrian for those of us who are better off……….stables and manor houses can be included in the background of the image.

A unique service, from your own photographs, either provided digitally of using the snail paced services of Royal Mail. The images are enhanced using the latest graphics software and cropped to the desired size, then printed directly onto the canvas.

The designs are then embroidered by hand, painstaking attention to detail is given, care in the application a primal concern.

Alison Little is one of the North-West’ most progressive textiles artists, exhibiting at leading arts venues in Liverpool and across the UK. She has her embroideries on sale directly to the public from Arts Hub on Lark Lane. Embroidery from photographs printed directly the canvas is a pioneering technique which she has evolved, unique to her practice. A is a Director and teaches embroidery for the newly formed Liverpool Independent Art School.

A £50 deal is on offer, a framed image of your prized pet:

(Approximately, some variation may be necessary)

Delivered directly to your door. Get in touch for inquiries in regards to larger sizes or specific requests. 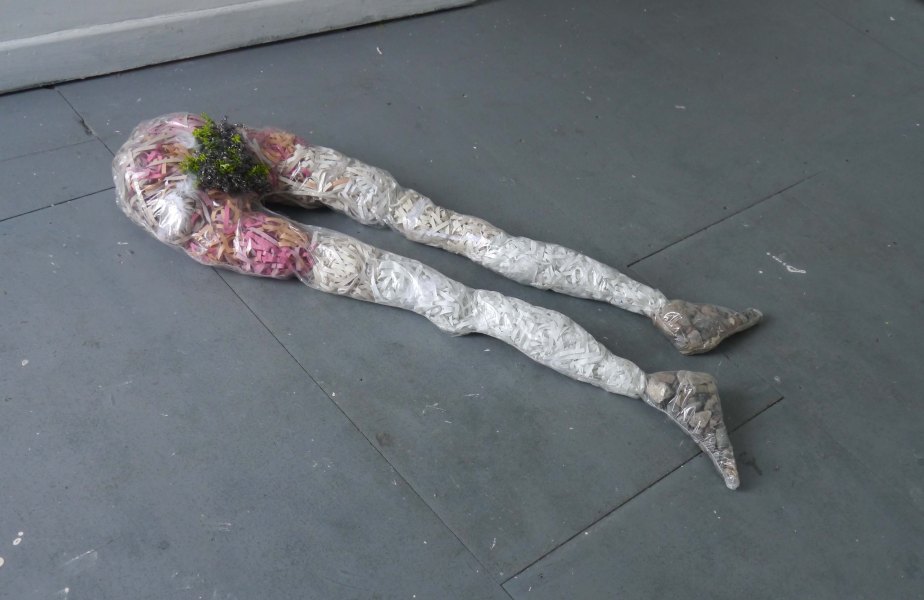 ‘Fatigue’ is the third piece in the animated sculpture series SV: Sex by Violence,  introduces the physical consequences of violation: extreme tiredness and the bodies need to sleep as part of the recovery process.

The pink tones show the pain which is still present around the groin area, the central thoughts of the rape survivor are still the sex attack which she has faced. Although the pubic hair is still rough there are some minuscule leaves growing through indicating new life and the beginning of the recovery process. The pinks feed through into more natural tones in this we have feathers intersected. This implies pillows and the concept of sleep. The final stones are located in the feet showing her still to be weighed down emotionally from the attack.

The need for excessive amounts of sleep after a sex attack is commonplace. It allows the body time to recover and become strong again. However, sleep is also a time where unpleasant flash backs of the attack may occur. Re-occurring visions of the attacker and the location of the assault are ever present in the initial periods of heavy sleep. Slumber is also a time for contemplation and the unpleasant thoughts of self-blame, the feeling of being unclean and dirty, ongoing fears and anxieties.

Fatigue is a piece which truly reflects the tiredness and sleep process that occur after a sex attack. 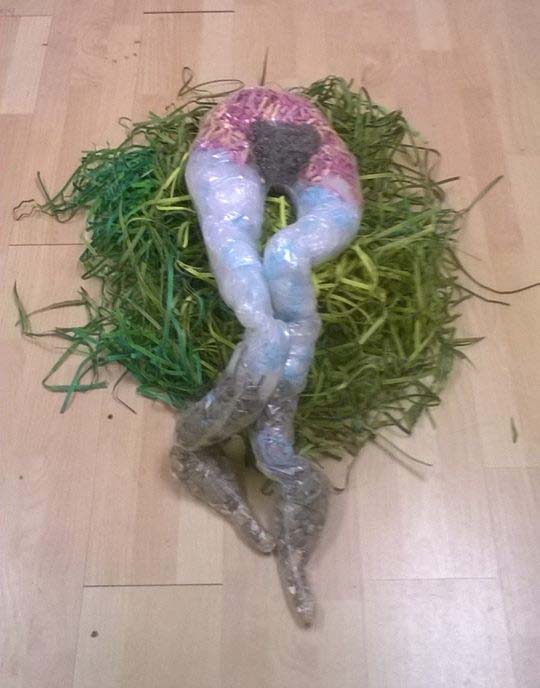 ‘Coming Too’ is the second of the animated sculpture series SV: Sex by Violence. The form highlights the process of the woman recovering from clinical shock as a result of a sex attack. The blue tones worked through the form illustrates the concept of water flowing through her body. The zigzag which waves through the body as the brain re-engages with the bodily muscles.

The pink tones around the groin indicate the notion of pain from the sex attack, but also the concept of blood flowing through the veins, ligaments which are alive and well. Abrasive material used for the public hair is repetitive of ‘Invasion’, a rough texture which tries to prevent the intrusion of the female form.

The grey tones of shredded paper towards the ankles indicate the legs are still weighed down. Located in the feet, the stones show the victim is still heavy and unable to move and physically leave the location.

Feed through clear polythene we have blue tones through the main bulk of the limbs, indicating the concept of water flowing through the veins. Combined with the way in which the legs are positioned expose us to the concept of the body coming out of clinical shock. The feeling of water zigzagging through the human form as the brain and the muscles of the body work in partnership with each other again. In clinical terms shock is when you do not have enough blood circulating around the body. A drop in blood pressure reduces the flow of oxygen and nutrients to a persons vital organs: the brain, heart and lungs. Shock in this sense is a response to a traumatic experience and common in rape cases.

‘Coming Too’ is a graphic depiction of the process of clinical shock but to a degree also a positive illustration of human endeavour to survive. 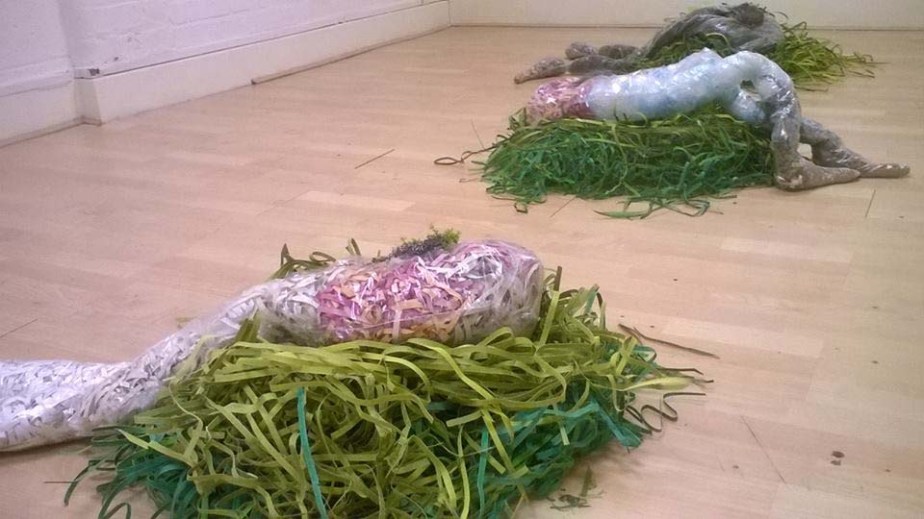 SV: Sex by Violence, shreds its way through zauhause gallery

SV: Sex by Violence, the truth behind the trauma is a solo exhibition brought to us by Liverpool based, feminist artist: Alison Little. An array of shredded colours made an entrance at the first floor, Gostins based zauhause gallery on Monday morning.

We have a visually stunning exhibition and equally colourful transformation of white contemporary art space. The lead into the gallery presents the name of the exhibition etched to the entrance, echoed on the rear wall, we are reminded of the important issue of the show: sexual violence. We are then taken to the rear of the gallery, the first three exhibits being floor-based, female lower limbs located on birds nest like piles of green shredded paper. Our vision finished off with the final plinth based form.

The exhibition comprises of a series of 4 animated sculptures entitled SV, Sex by Violence. The works are a graphic depiction of the act of a woman being raped, each form representing a different stage in the process from the initial act to the recovery. All forms replicate a woman’s lower body and legs, each is made from polythene and shredded paper combined with found object. ‘Invasion’ is the first of the works and represents an interpretation of a woman being violated, The nail which protrudes the groin area represent the woman muscles fighting against the undesired penetration of her body. They rust and spiral out and are complimented by the through wire wool of the pubic hair. ‘Invasion’ is the most traumatic piece in the collection, the body being forced in a way it does not desire. ‘Coming Too’ highlights the process of the woman recovering from clinical shock as a result of the sex attack. The blue tones worked through the form illustrates the concept of water flowing through her body. The zigzag which waves through the body as the brain re-engages with the bodily muscles. The knees are bent upright and we present the physical process of recovering from shock. ‘Fatigue’ introduces the physical consequences of violation: extreme tiredness and the bodies need to sleep as part of the recovery process. She is stretched out into a sleeping position and we can see small leaves growing through her pubic hair, the start of the recovery process. ‘Life from the Waist Down’ illustrates the more developed stages of the recovery process, the body and the mind are becoming strong again, the form is upright and healthy.

Alison Little, the artist behind the forms, she has been North -West based for the last decade and worked on commissions from the Superlambanana trail to the Penguins. Her conceptual work began to move forward several years ago being exhibited at the Williamson Gallery, Unit 51 in the Baltic Triangle in addition to a commission completed for the equality council in Derby. This is the second show she has Curated, the first ‘Shatter the Silence, Violence against Women’, a group show being held at the Quaker Meeting House in School Lane, Liverpool City City. Alison helps Organise the Reclaim the Night March held in spring in Liverpool annually. The intentions behind the exhibition as a means of activism against sexual violence and to play its role in her campaign work.

An exhibition which brings the terrors of a sex attack to the minds of its viewers, shocking, but equally stunning in parallel.

A must see, one week only.

Private View to be held on: