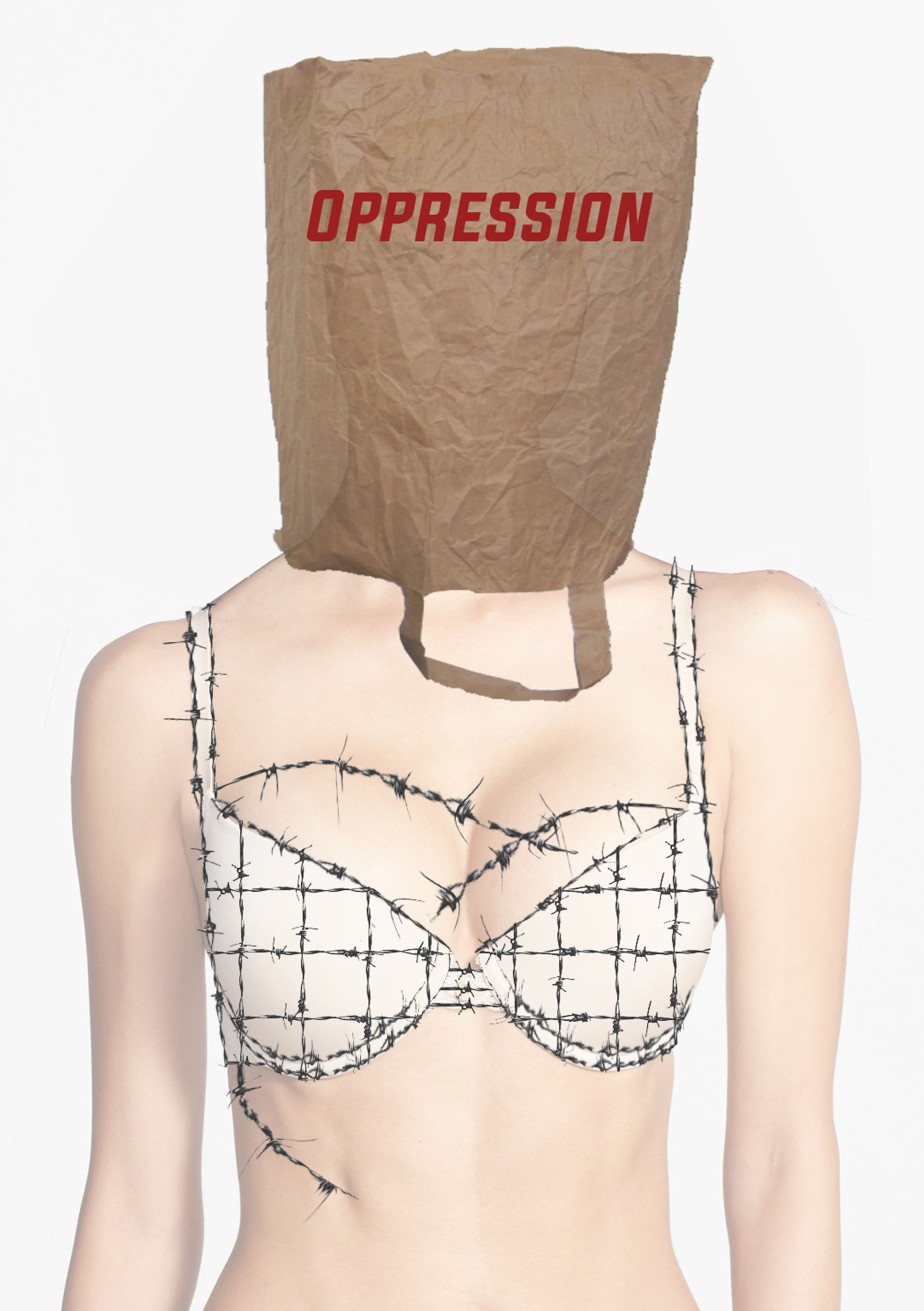 Oppression identifies with a core item of woman’ under apparel as a leader in female subjugation: the Push-up bra.

A push-up bra pushes the breasts abnormally upwards to present the image of a larger cleavage. It is a fantastical projection of what women should look like, an imaged informed by the male gaze. The female presented has been hypersexualized, the figure of a centrefold pin-up popular with male magazines such as FHM and Playboy. We see an abnormal image of a female-shaped by the push-up bra, a girl who is stick thin but large breasted. We do not see the imaged of a woman with a large bosom balanced out by the healthy weight of her hips, we do not see a health athletic girl with a modest bust to match the slenderness of her body.

Push-up bras are unhealthy, they increase the risk of developing breast cancer. Not wearing a bra at all is not immoral or an invitation for sex, oppressive messages of the necessity of bra wearing are passed down from previous generations as part of societies dress codes.

In ‘Oppression’ we see the push-up bra presented by the barbed wire structure of the apparel which represents a restriction of bodily movement. Towards the top, we see stray sections which look to potentially burst the almost fake, balloon-like breast forms. On the lower section, the stray wire draws towards the rib cage showing a dangerously thin girl, possibly even anorexic. The pastiness of the skin and the lack of colour in her tome subterfuges the image of poor health.

The image of the woman is finished off with the ultimate image of Domination: the face being obscured from view with the low-economy household paper bag. The final stamp like font entitling the piece ‘Oppression’.

This is a strong graphical image of female oppression, an artwork which looks to promote breaking free from the restrictions: physical and psychological of the push-up bra. 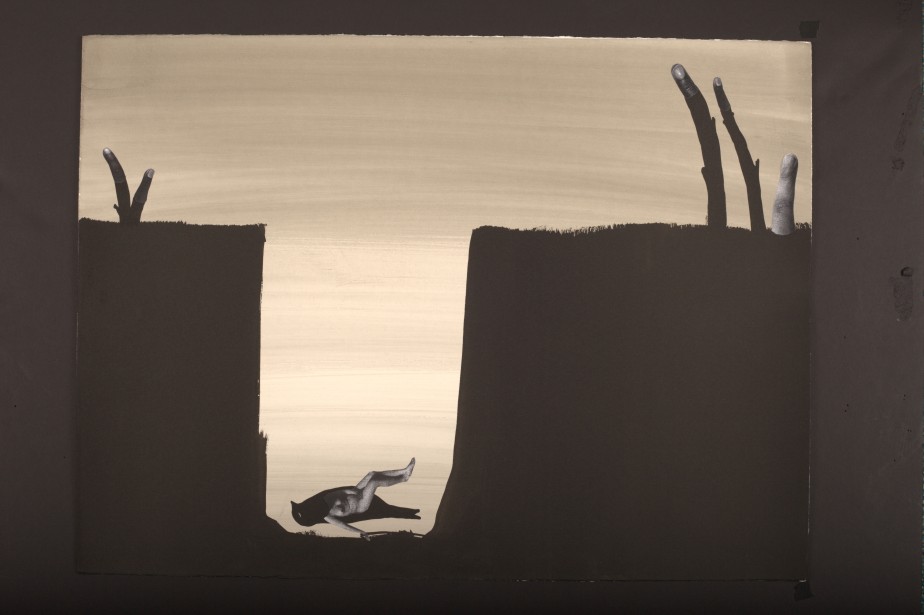 Delirium was a pen and ink drawing exhibited in the Phantom Limb exhibition at the Victoria Museum and Gallery in 2016. The artist Nany Andrew created many works as a response to the Post Traumatic Stress Disorder after a heart aneurysm. The image was used as a start point for a piece of creative writing which will be read at part of the Light Night Liverpool, Central Library 5-7pm by the author, Alison Little.

She lies in a deep grave, a slot pushed further into the ground than needed. A simple horizon shape is drawn down, a void created to take in the female form. The landscape sliced lengthways to expose what lies beneath its surface. She lies stretched sideways into the alcove. Half woman, half bird. Her head encased by the shell of the bird, the body naked and exposed for all to see. A black bird, a symbol of death the figure lies twisted, not dead but not inclined to alter its position to that of comfort. The eye of the black feathered creature slit-like, almost coming to the end of its life as it looks towards the freedom of its domain: the sky. Breasts are in full vision, her arched hand hiding the groin area. Her legs are raised, feet high ready to be manoeuvred into the recovery position. The tail of the bird and the shadow from her lower body merge into one. To the front she reaches towards a stick, a potential lever to aid her escape. Above, on the horizon, we can see the trees at first, upon closer inspection they are individual fingers growing out of the ground. Singular branches functioning without foliage., each finger disjointed from the others spindling out from the black of the terrain. Gentle lines indicate grass, bur no lavish and free grown, sparse within this bleak vision. The monotone mix of black and white vision. Ink which is not pure in its application, diluted and varied in blocking features. The neutrals of the sky washed out, contaminating the vision of existence. 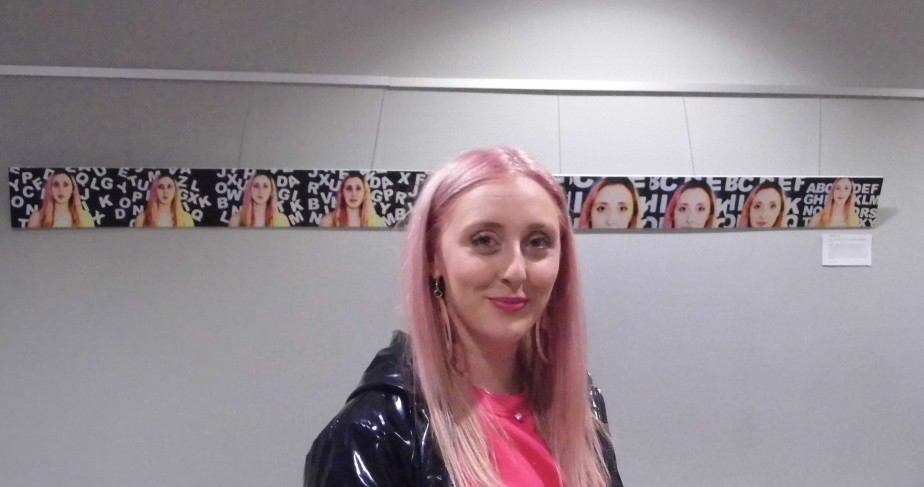 Alphabet Soup is the latest work of Liverpool based conceptual photographer: Emma Walker. Emma is a survivor of sexual assault, the intention of her artwork is to create a positive piece which will help other survivors come to terms with the traumas of rape. Alphabet Soup takes us through the emotions experienced after a sex attack: shock, confusion, sadness and distraught:

‘I wanted to create honest images that captured the feelings and thoughts, by non-verbal communication.’

States Emma. In the fifth image, there is no girl present in the photograph, this represents a point in which she has reached rock bottom. The further images represent the recovery process, the figure is returning to the image step by step. The ultimate image is described by Emma:

The final photograph shows a girl happy, unafraid and brave. Not hiding away. She is proud. She can do this and got through this. The letters are in alphabetical order, showing how the confusion settled and mental health had started to fall back into place.

After her attack, Emma became involved with RASA (Rape and Sexual Assault) the Merseyside-based counselling service. Last year she Organised a climb up Snowdon and raised over a thousand pounds for the charity. She has plans for a further charity climb this year, all proceeds from the sale of Alphabet Soup are to go to RASA. She is also training to be a counsellor in the hope of helping other survivors of Sexual Violence.

Alphabet Soup is being exhibited as part of the Shatter the Silence exhibition.’Shatter the Silence’ exhibition takes place in the cafe exhibition space at the Quaker Meeting House, 22 School Lane, Liverpool L1 3BT, the private View was held 4 on Friday 24/03/17, the exhibition running until Sunday the 21/05/17. The Cafe is open from 9am-3pm weekdays and 9am-4pm on Saturdays closed on Sundays. 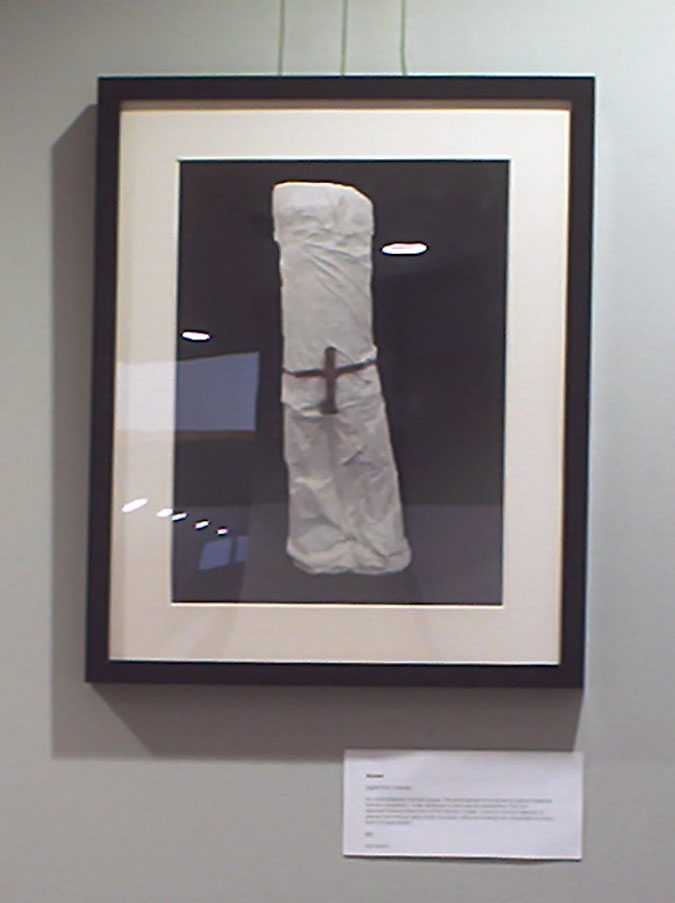 Artist Sue Leach, a Lancashire lass ‘migrated’ to Liverpool to train as a nurse at the age of eighteen. She was drawn to Liverpool because of its artistic milieu. Although not intending to remain, fifty years later she is still a resident in what was the Toxteth deer park, the greenest and most interesting area in Liverpool. Not having had the luxury to train as an artist when young, her art career developed slowly over the years and on retirement commenced a part time fine art degree. Her current work explores women’s issues including childbirth, motherhood, discrimination and feminism.

In the later months of last year Sue exhibited at Unit 51 for the ‘Respect’ exhibition organised by the Liverpool Health Consortium in celebration of World Mental Health Week. We were presented with a baby book like form, three solid panels where an infant can help turn the large page like forms as part of the reading process. The panels are made from porcelain to symbolise fragility, bound together with ribbons using methods similar to those used for items of baby clothing. On the panels, there are images of items which relate to childcare, knitting needles, safety pins, nail scissors, zips, but also a hammer. These ‘tools’ of motherhood present opposing views, in this we have items which could help care for a child, but items which could also harm. Sue looks to highlight the anxiety a new mother can feel and how this is dependent on her support
network .

‘Woman’ is a large scale sculpture made with chicken wire and Plaster of Paris. The virtually shapeless form depicts a woman’s self image. The female body viewed as a commodity begs the question, is it ever quite right? The indistinguishable head and features negates personality, emotions and feelings. This can be seen as a symbol of a woman’s position in society in general or in personal relationships. The chastity belt conveys both ownership and sexual oppression. ‘Woman’ is currently being exhibited at the ‘Shatter the Silence’ exhibition held at the Quaker meeting House, Liverpool.

Nearing the end of her degree, Leach is busy along with other artists organising an exhibition on the migration crisis in June at Liverpool Central Library. The aim of the exhibition is to educate and raise funds. Workshops will be available for school aged children. The exhibition runs from 03/06/17 until 23/06/17. There will be a private view on the 2 nd of June at 17.30 pm.

We have a new artist from an earlier generation, we have life experience combined with current arts degree study, we have work which utalises modern conceptual practice to explore issues which are as relivent as they were when she firrst migated to Liverpool.

We have Sue Leach, a new name on more mature shoulders making her mark on the Liverpool creative sector.

‘Shatter the Silence’ exhibition takes place in the cafe exhibition space at the Quaker Meeting House, 22 School Lane, Liverpool L1 3BT, the private View being held 4-6pm on Friday 24/03/17, the exhibition running until Sunday the 21/05/17. The Cafe is open from 9am-3pm weekdays and 9am-4pm on Saturdays closed on Sundays. Arts activities relating to the exhibition are planned for the Light Night taking place on the 19/05/17 the closing weekend of the exhibition.